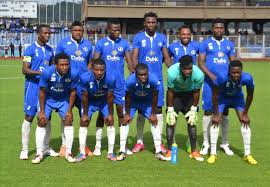 Enyimba International have increased their advantage at the summit of the Nigeria Premier League table to five points as they beat hitherto second-placed Wikki Tourists 2-0 in their Week 31 clash in Aba on Sunday.

The Peoples Elephant, who are hoping for a seventh league crown this season, have their captain, Chinedu Udoji, to thank for Sunday’s win as the skilful defender scored the two goals that gave Enyimba another precious three points at home.

With the latest addition, Enyimba have increased their points tally to 58 points and have a five-point gap ahead of closest rival Sunshine Stars who are back in contention for the title after their slim 1-0 win over Abia Warriors.

Warri Wolves who are in third spot secured a good result on Sunday as they forced Kano Pillars to a 1-1 draw away from home.

Three other games on Sunday also ended in stalemates as Shooting Stars played a barren draw away to Lobi Stars in Markurdi while big spenders FC Ifeanyi Ubah also dropped points as their game ended 1-1 with Giwa FC.

The tie in Jalingo also failed to produce any winner as FC Taraba and El-Kanemi settled for a 1-1 draw.

In the Garden City derby, Sharks edged the tie as they defeated their City rivals Dolphins FC 1-0 to momentarily move away from the relegation zone.