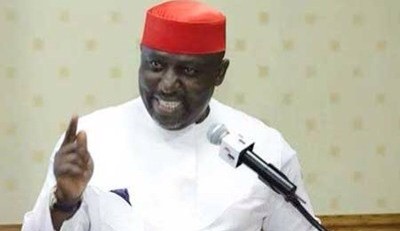 Following the meeting between President Muhammadu Buhari and governors elected on the platform of All Progressives Congress (APC) Tuesday night, the governors have expressed worries over the leadership crisis rocking the National Assembly.
Imo State Governor, Rochas Okorocha, made the position of the governors known when he spoke with State House correspondents after the meeting.

Okorocha said: “We are the All Progressives Congress (APC) governors, we met with Mr. President, we are worried by what is happening at the National Assembly.

“We felt we should rub minds with Mr. President and also to commend him on the steps he has taken so far to address the issue of the economy of the nation which is literarily in shamble.”

He noted that the meeting they had with Buhari was reassuring, adding that it was an indication that there was light at the dark end of the tunnel.

“But with all these achievements we are making, we are worried by the pockets of disagreements going on at the National Assembly and we have resolved that we came from a party and our party’s views should be respected.

“So, we feel that there’s is room for us to invite our senators and look more into the matter and see how we can all make peace.

“We believe that our party which we all came from that everyone should respect our party and for that reason we have decide that we are going to invite our senators and rub minds with them.

“We are saying that there should not be a winner takes it all, that we should carry everybody along, accommodate others as suggested by the party” Okorocha said.

Edo State Governor, Adams Oshiomhole, on his part, told journalists: “Basically, what we are saying is that the senators should adopt the position of the party.

“We were all elected on the platform of the party, we are not just a collection of individuals. We are a political party and when the party has spoken we must listen otherwise if it was a game of individuals like golf then individuals can go their way.

“I think it is very clear at this point that the party has the responsibility to keep the system going. So we as progressive governors we have listed to the president and we have discussed extensively and we are clear that the party’s position should be supported by the senators, this is the way it should be and we should start on a note of walking closely.”

He added that the governors listen to the party, and as such it is expected APC’s senators should also do the same.

After breaking of fast on Tuesday evening, Buhari entered into another meeting at the Presidential Villa with all the APC’s governors.

At the meeting, which started around 11pm Tuesday, 16 governors out of the 22 states controlled by APC were present.

Buhari To Meet With Over 10,000 Defecting Politicians

We are ready for handover don’t panic, Amaechi tells Wike